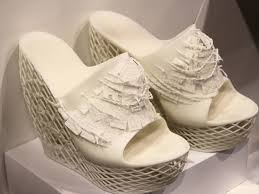 YOUNGSTOWN, Ohio — Working in manufacturing can be dangerous and dull.

But you would never know that from the excited, smiling faces of children watching a laser beam slowly melt layer upon layer of plastic sand.

The 3-D printer could have been producing a cheap, specialized component for a wind turbine or electric vehicle.

Helping children experience 3-D printing is exciting, Gorham said, and is similar to NAMII’s larger mission to increase U.S. experience and knowledge in 3-D printing. The application of information technology to improve the business of making things, such as 3-D printing, is known as “advanced manufacturing,” and experts say it is sparking a “third industrial revolution.”

The White House and stakeholders are banking on success in advanced manufacturing to revive U.S. manufacturing and to forge ahead in dynamic industries like clean energy. It will also make manufacturing more environmentally sustainable, lowering energy and material consumption, they say.

The institutes are not meant to be research laboratories, but they “create space” to convene top talent from universities, large to small companies and government to test and gather data for promising new processes, technologies and materials to make it easier for companies to work with them, Molnar explained.

“What is critical for industry using a new material or a new technology is ‘de-risking’ it,” he said.

NNMI was the No. 1 recommendation from a 2012 report by the nation’s leading CEOs and universities, including Ford Motor Co., Dow Chemical Co., Stanford University and the Massachusetts Institute of Technology, gathered by Obama to identify ways to elevate American competitiveness in manufacturing.

In this year’s State of the Union address, the president asked for $1 billion over 10 years for 15 NNMI institutes. Last month, Obama upped the ante in a speech on the middle class, saying that the aim should be 45 in total.

Congress has yet to fund all of NNMI, but the administration has already moved to set up the first three institutes. They have a federal funding commitment of $200 million over five years drawn from five agencies under existing budget authority, to be awarded by the end of the year, according to the White House. Federal funds would be at least matched from the private-sector consortium awarded any project.

The fact that the departments of Defense, Energy and Commerce; NASA; and the National Science Foundation have found the money to fund NNMI in this tight budget environment shows how important this initiative is across the administration, Molnar said. Despite the White House emphasis, however, outside focus on the institutes has been minimal compared with other efforts to support manufacturing, such as the push to revamp the tax structure — which stakeholders agree has more near-term impact — or tax incentives, especially for renewable energy. The various 3D Printing Videos shown on the 3D Printing Channel show many applications of the technology.

But for the alternative energy sector, creating these public-private partnerships is crucial, according to Bill Janeway, regarded as one of the founders of the modern private equity sector and a partner at private equity firm Warburg Pincus.

Overall, the digital economy has momentum and investment, Janeway said in an interview with Business Insider last March, but “what we are missing, what has stalled is building the groundwork, the foundations for the next new economy, that low-carbon, green-tech, alternative-energy economy that most of us know we really need in the face of climate change.”

NNMI is coming at the right time, said Bill Aulet, managing director of the Martin Trust Center for MIT Entrepreneurship at the MIT Sloan School of Management. The opportunities for entrepreneurship are switching from software to hardware — real products like batteries or solar panels — which he sees reflected in his own students’ interests.

“There is a lot of belief that this is different,” Aulet said. “The barriers of entry for getting into energy are very hard. You really need these kinds of things.”

Brad Markell, executive director of the AFL-CIO’s Industrial Union Council, said the NNMI initiative is helping to focus work that has been happening in the manufacturing sector for some time.

“All the things we are going to have to solve, the problems we have — more mobility for people that doesn’t pollute, clean energy, biomedical advances — all that stuff is going to flow from manufacturing. I think there is a realization that countries need to capture the effects of innovation in manufacturing and have it feed back,” he said.