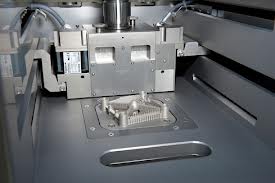 A German 3D printing company’s plan to raise €75m via an initial public offering is shining a spotlight on a method of creating metal parts that could help propel a rocket into space.
SLM Solutions Group, which builds metal-based additive manufacturing technology for customers including Nasa, SpaceX, General Electric and Siemens, plans to list in Frankfurt this year.

It is possible to 3D-print objects in metals such as aluminium, stainless steel and titanium by melting fine layers of metal powder with a laser beam – a process known as selective-laser melting. The technique has been around for years but is only now beginning to generate excitement.

SLM Group makes machines that use this technique to produce parts where traditional manufacturing methods – such as milling, casting, welding, stamping or moulding – cannot achieve the desired durability, temperature or corrosion resistance.

Additive manufacturing enables industrial designers to focus more on the function of a product rather than the limitations of machining it.

Metal-based additive manufacturing accounts for less than 10 per cent of the overall 3D printing market. SLM Group is also comparatively small, having generated €22m in revenues in 2013 and sold fewer than 30 selective-laser melting machines. Its competitors include Germany’s EOS and Concept Laser.
Still, Markus Rechlin, chief executive of SLM Group believes the market for metal- based 3D printing is at an “inflection point” and the technology is “ready for industrial series production”.

Nasa last year showed off the largest 3D-printed rocket engine injector, during an engine firing that generated a record 20,000 pounds of thrust. The injector was produced using selective laser melting to build up the part from layers of nickel-chromium alloy. It could not immediately be ascertained whether Nasa used SLM Group’s machines on that particular project.

Meanwhile, General Electric is using SLM’s 3D-printing machines to make fuel nozzles for jet engines. Those fuel nozzles used to be made up of 18 different parts but now comprise one single piece, making it up to 25 per cent lighter. By 2020, it expects to have made 100,000 3D-printed fuel nozzles.

Siegfried Russwurm, head of Siemens industry division, told the Financial Times last week that 3D printing could be a good way of producing inner blades for gas turbines where the demands are similarly complex.
The higher the temperature that gas turbine blades can withstand, the more efficiently they are able to generate electricity from gas.

Gas turbines are cooled using tiny vapour channels that run along the blades. Those are currently made either with a laser or via a casting process – both methods can be expensive and complicated. Siemens is already using 3d printing to make spare parts for gas turbines.
However, Mr Russwurm cast doubt on whether the technology will be used more widely in industrial production because of the time it takes to produce a part.