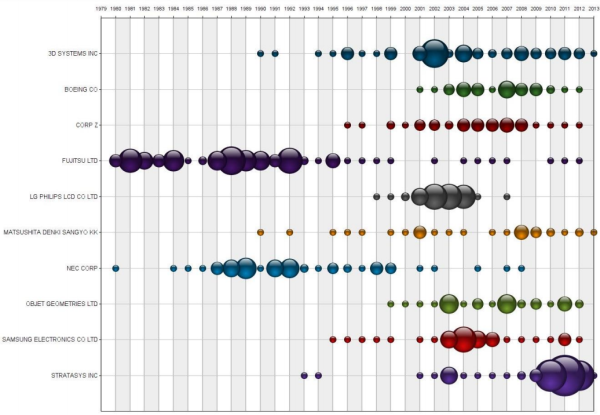 In a recently released report, the UK’s Intellectual Property Office (IPO) has stated that the amount of patent filing related to 3D printing has increased dramatically since the year 2000.

After analyzing 9000 patent records filed since 1980, a team of IPO researchers pinpointed a rapid upswing in 3D printing related patents; particularly in the fields of biomedicine, circuitry and electrode fabrication. While the US is still, by far and away, the top IP generator when it comes to 3D printing patents, multinationals based outside of the US have shown a strong interest in developing 3D printing related technology.

3D Systems filed its first 3D printing patent in 1990. Stratasys filed three years later. Surprisingly though, while the two companies have recently seen an increase in the number of patents they’re filing each year, it was Fujitsu that filed the first 3D printing related patents way back in 1980.

Although there are number of interesting points made in the IPO’s dense report, one fact that stood out was that given the age of Fujitsu’s patents the IP tied to them is set to expire soon. While Fujitsu has said it’s interested in reentering the 3D printing market, the renewal of these patents might prove difficult or unprofitable. If the patents are allowed to lapse, however, a number of fundamental technologies would become available to 3D printer manufacturers, potentially ushering in a whole new age of innovation.