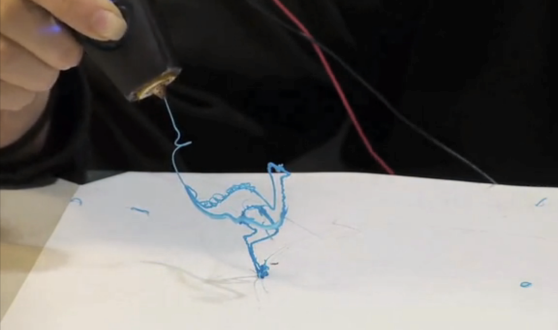 3D printing gets crowdfunded in a big way
3doodler
The 3Doodler is tiny but powerful.

2013 was a tremendously successful year for 3D printers on Kickstarter. Products like the 3Doodler ($2.3 million), the Buccaneer (nearly $1.5 million), and Peachy Printer ($650,000) vastly overshot their funding goals and proved that Kickstarter is still a powerful platform for getting complicated hardware projects off the ground. We fully expect 2014 to bring us a whole new crop of crowdfunded 3D printing projects.

2013 was year that big brands finally discovered what 3D printing can do for their marketing. Consider Coca-C0la, which used 3D printing to give customers miniature versions of themselves, or Disney, which took the same approach with 3D printed Imperial Stormtroopers for park visitors. Victoria’s Secret brought 3D printing into the fashion world via a partnership with Shapeways, and Neiman Marcus pushed it into jewelry when it started selling 3D printed items in its stores. Even big retailers have signed on: In the retail world, both Staples and Office Depot announced their plans to sell 3D printers in their stores. Online, Amazon opened a section of its site dedicated just to 3D printing.

Hollywood, too, got involved via films: The Hobbit and Enders Game both showed pretty clearly that 3D printing can be a friend to Hollywood.