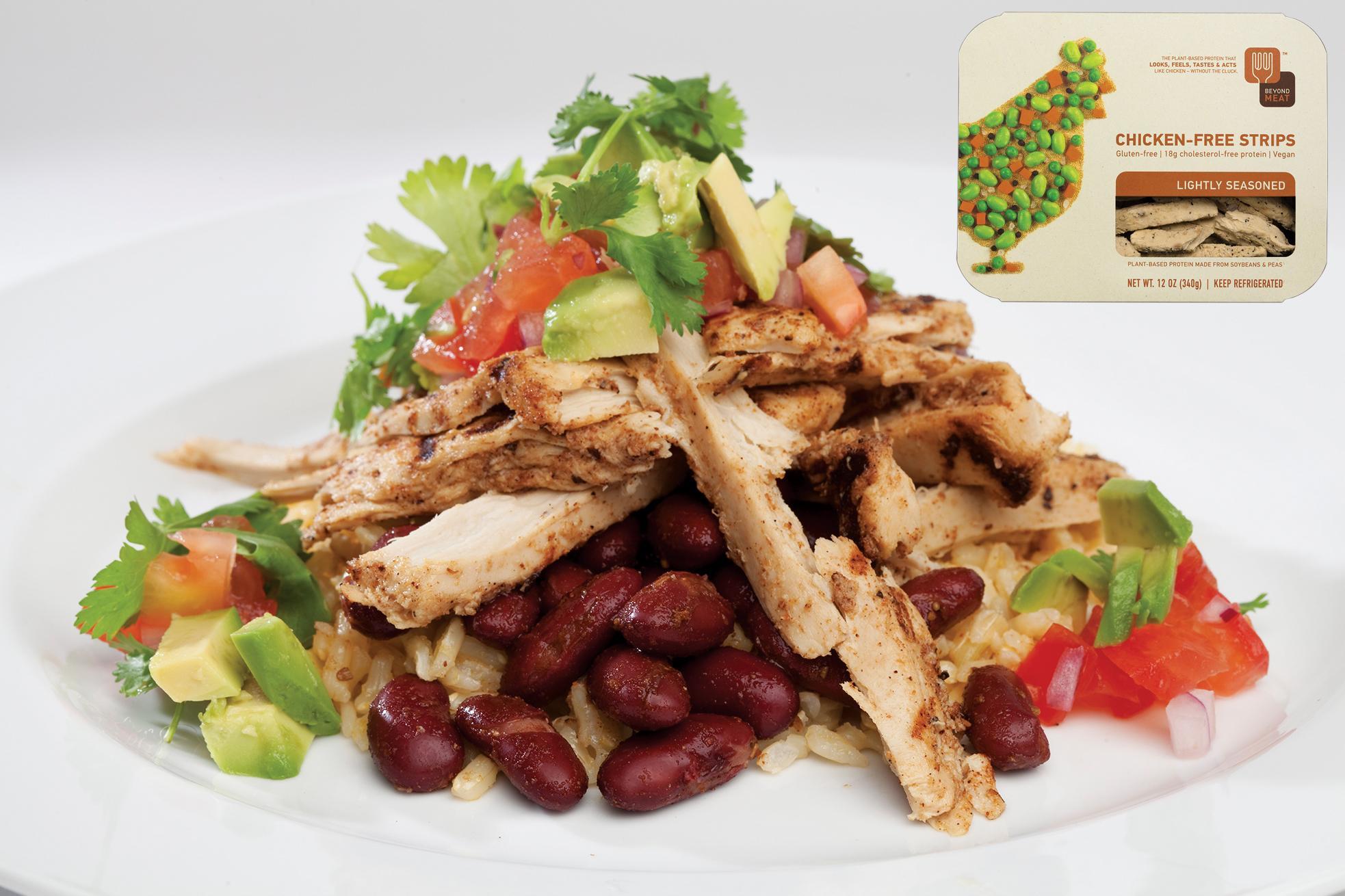 The meat Brown is pulling apart looks normal enough: beige flesh that separates into long strands. It would not be out of place in a chicken salad or Caesar wrap. Bob Prusha, a colleague of Brown’s, stands over a stove sautéing a batch for us to eat. But the meat Brown is fiddling with and Prusha is frying is far from ordinary. It’s actually not meat at all.

Brown is the CEO of Beyond Meat, a four-year-old company that manufactures a meat substitute made mainly from soy and pea proteins and amaranth. Mock meat is not a new idea. Grocery stores are full of plant-based substitutes—the Boca and Gardenburgers of the world, not to mention Asian staples like tofu and seitan. What sets Beyond Meat apart is how startlingly meat-like its product is. The “chicken” strips have the distinct fibrous structure of poultry, and they deliver a similar nutritional profile. Each serving has about the same amount of protein as an equivalent portion of chicken, but with zero cholesterol or saturated and trans fats. To Brown, there is little difference between his product and the real thing. Factory-farmed chickens aren’t really treated as animals, he says; they’re machines that transform vegetable inputs into chicken breasts. Beyond Meat simply uses a more efficient production system. Where one pound of cooked boneless chicken requires 7.5 pounds of dry feed and 30 liters of water, the same amount of Beyond Meat requires only 1.1 pound of ingredients and two liters of water.

The ability to efficiently create meat, or something sufficiently meat-like, will become progressively more important in coming years because humanity may be reaching a point when there’s not enough animal protein to go around. The United Nations expects the global population to grow from the current 7.2 billion to 9.6 billion by 2050. Also, as countries such as China and India continue to develop, their populations are adopting more Western diets. Worldwide the amount of meat eaten per person nearly doubled from 1961 to 2007, and the UN projects it will double again by 2050. This means that there are more and more “meat markets” growing and gaining momentum. Who will satisfy the desires for the product? There is indeed a lot of hype about 3D Printed Food

In other words, the planet needs to rethink how it gets its meat. Brown is addressing the issue by supplying a near-perfect meat analogue, but he is not alone in reinventing animal products. Just across town, Modern Meadow uses 3-D printers and tissue engineering to grow meat in a lab. The company already has a refrigerator full of lab-grown beef and pork; in fact, the company’s co-founder, Gabor Forgacs, fried and ate a piece of engineered pork onstage at a 2011 TED talk. Another scientist, Mark Post at Maastricht University in the Netherlands, is also using tissue engineering to produce meat in a lab. In August, he served an entire lab-grown burger to two diners on a London stage as a curious but skeptical crowd looked on. The next obvious question, beyond the investment, is who will regulate 3D Printed Food?